I thought it might be useful to run through the three fundamental stages of miniature painting - basecoating, shading, and highlighting - with a step-by-step walk through.  Though I'm sure most painters are already familiar with these steps it's worthwhile walking through them for the benefit of folks who are just starting out.

I've picked the Reaper miniature, Rozmina, a half-orc pirate for the tutorial because I have something of a fetish for pirates.  Reaper has a large collection of pirate miniatures and I'm trying to collect them all.  I've also painted a lot of orcs.  Between several boxes of Grendadier orcs, a handful of Reapers, my 40K Ork army, and a large collection of Lord of the Rings orc and goblin miniatures I've painted enough orcs over the years to populate the spawning pits of Mordor.  I always enjoy coming up with different ways to paint orcs, and for this post I've decided to try out a new scheme for orc flesh, so this will be something of an experiment for me as well.  The flesh tone was inspired by Star Trek's Orion slave girls.

Because the pewter base she comes on is too narrow, the first step was to mount her on a larger plastic base and then fill it in with greenstuff, sculpting it to match the deck planks.  The model was then sprayed with black primer. 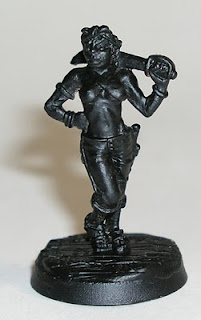 
1. I've basecoated the flesh with a 1:1 mix of GW Gnarloc Green : Reaper Tanned Flesh
2. The pants and halter were basecoated with GW Calthan Brown
3. The bandanna was painted with Reaper Deep Red
4. The sword blade was painted with GW Boltgun Metal
5. Sword hilt and jewelry were basecoated with a 1:1 mix of GW Scorched Brown : GW Shining Gold
6. The sandals and leather straps were painted GW Scorched Brown

You will note the the miniature looks like absolute crap at this stage. They always look bad after basecoating, but after the shading and highlighting stages they really perk up.  The bright side is that you don't have to be too careful in this stage.  Any mistakes you make can be corrected in the subsequent stages. 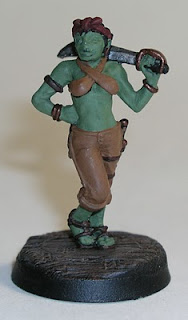 
1. I washed the flesh with a 2:1 mix of Reaper Grass Green : Reaper Mahogany Brown.
2. The pants and halter were washed with GW Devlan Mud wash.
3. The sword blade was washed with GW Badab Black wash. 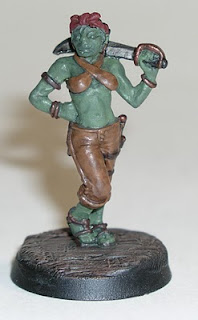 
1. Next I reapplied the flesh basecoat to all but the most recessed areas of the skin.
2. I applied a second wash of Devlan Mud to the pants and  halter.
3. I shaded the bandanna by painting a 1:1 mix of Reaper Deep Red : Black directly into the folds and recesses. 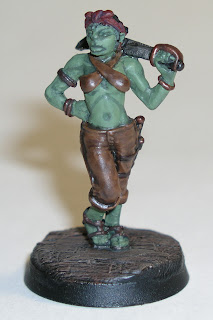 
1. The pants and halter were then lightly drybrushed with GW Calthan Brown.
2. The flesh was given a layer of 2:1:1 GW Gnarloc Green : GW Vomit Brown : Reaper Tanned Flesh.
3. The bandanna was highlighted with Reaper Blood Red.
4. The sword hilt and jewelry were layered with GW Shining Gold.

I added Vomit Brown, a light yellowish brown, to the flesh mix to add a touch of warmth to the skin tone.  When painting my 40K orks I add yellow, instead, for a slightly garish, cartoony look, which I didn't want for this miniature.  You can see that the figure is already looking much better after some shading and highlighting.  The finishing touches, though subtle, will punch it up even more. 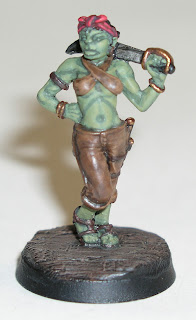 2. The eyes were blocked in with black paint. 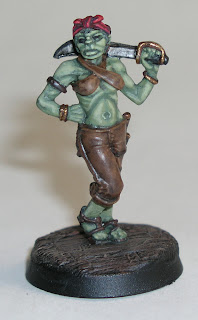 
This step consists of the final finishing touches:

1. The eyes were painted in with white paint, leaving a small area of black paint surrounding the white.  The pupils were added in black.

2. Pure black paint was thinned down with Reaper Flow Improver and a thin black line was applied at all textural and tonal boundaries, such as where cloth or jewelry meets the skin.  This creates both a sharp contrast and neatens the boundary up, cleaning up the inevitable paint slop at these edges.  The result is a realistic looking shadow effect where ever there should be areas of relief.

3. The pants and halter were given a final edge highlight of GW Calthan Brown mixed with a bit of Golden Blond.

4. Finally, the lower lip was given a thinned down wash of GW Baal Red wash, followed by a thin coat of GW Leviathan Purple wash.  Orion slave girls all have red lips to contrast their green skin, so Rozmina got them too. 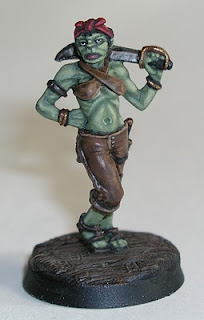 Just for fun I decided to try the new skin mix on another half-orc pirate, Gagnar Scragslayer, the only difference was that I altered the flesh wash mix to 2:1 Mahogany Brown : Grass Green.  I wanted a darker shade for him to emphasize his chiseled physique and a lighter shade for Rozmina's softer, feminine curves. 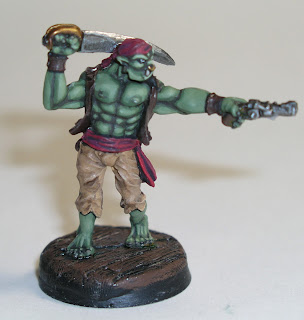 Thank you. An interesting read.

Based on your post on paints, I made my first purchase from reaper.

I'm glad I did, the citadel pots are just too wasteful and expensive.

I just painted my Otherworld carrion crawler using the reaper dead skin tones, but found it needed a wash to warm it over at the end.

I'm looking forward to the release of Reaper's High Density paints, which should be out sometime this month. I'll be placing an order just as soon as I'm able.