Remember back when we first started playing D&D, how everything was new and exciting, and every monster was approached with trepidation?  Who knew what fearsome powers it might possess, and how might we slay such a fearsome beast?  Those heady days of innocence lasted, what, three or four months?

That's about how long it took my friends and me to memorize the Monster Manual from cover to cover.  Once we knew the statistics for every monster in the game we never quite felt that same anxious thrill of discovery. Oh we might feel some anxiety, but only because we knew exactly how tough that dragon was and could gauge the threat it posed down to the last hit point.

After a while I grew nostalgic for the old days - six months or so past - but once that genie was out of the bottle there was no stuffing it back in, was there?  Sure, the Fiend Folio was eventually published, introducing a whole new host of creatures, but my friends and I never embraced those goofy monsters with the unpronounceable names.

Eventually it occurred to me that maybe I was looking at the Monster Manual all wrong.  What if, instead of it being a rule book for AD&D, it was more like a medieval bestiary, something that actually existed in the game world and represented the sum total of what everyone "knew" about the creatures of the land?  A book like this might be a pretty neat find in a treasure trove.  Hell, if you wanted you could make Monster Manuals commonly available for sale at the local outfitters shop and let characters buy one.  Then they could freely look stuff up in their tome of lore.  Of course, we all know the problem with such bestiaries: they're notoriously unreliable, based on second-hand accounts and with nearly as many half-truths, and outright fictions as facts.

One of the first monsters I tweaked was ghouls, re-imagining them as a sentient race of carrion eaters.  Because most ghouls in civilized areas were seen lurking in graveyards, exhuming and eating corpses, they were assumed to be undead creatures and were slain on sight, so this assumption has never been corrected.  Since they are so persecuted, ghouls tend to be wary around humans, sometimes attacking, other times fleeing ("See, I turned them and they ran away. That proves that they're undead!").

The first time my players encountered these new ghouls they were exploring a crypt and I described a chamber with ghouls feasting on the remains of a dead body.  The characters immediately drew their weapons and prepared to attack.  The ghouls drew wicked, hooked gutting knives and assumed a defensive posture, waiting for the characters to come to them.  The players were a bit taken aback as this seemed pretty odd behaviour for undead so they decided to try talking and soon brokered an uneasy peace and realized that ghouls weren't undead at all.  This chance dungeon encounter led to a long-running story arc in which the characters allied themselves with a band of rebel ghouls and helped them to overthrow the mad ghoul king, Soros, and see their ghoulish companion, Rathad, assume the throne.  It was one of the most unusual and memorable turn of events I've ever run.

Interestingly, I've suggested this approach on several internet forums discussing how to separate player knowledge from character knowledge of monsters, and have received some pretty harsh criticism; I've been told that I'm abusing my powers as DM, that I'm not playing fair, and that I have no 'right' to change what players can expect as rules canon.  Such respondents must be players of newer vintages of the game, because I've never had anything but overwhelmingly positive feedback from players on this issue.  My experience is that players like the thrill of the unknown and the challenge of approaching encounters with a fresh perspective.

A number of years ago I was playing a gnome explorer, Cazban the Wanderer, in a 3rd edition campaign and made a point of taking notes every time we encountered a new monster.  I carefully measured and described the creatures in a very systematic method, and even kept a coil ring sketch book for my drawings and notes.  I was careful to include only knowledge obtained first hand in an encounter in my notes and began building up my own campaign bestiary.  The DM loved this and devoted part his campaign web site, entitled Cazban's Field Notes, to my monster descriptions and sketches, so that all the players had access to this character-derived bestiary.  It was a lot of fun and very popular with the group. 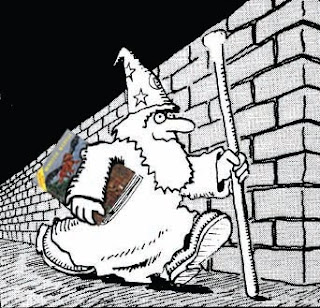 I had another epiphany today, while reading Al's latest dissection of AD&D, Rules, Rules, Rules, on Beyond the Black Gate.  Al challenged us to flip open the Dungeon Master's Guide to a random page and see what new and unexpected rule we learned.  This is one of the really cool things about the DMG.  I've had this book since 1980 and read it constantly all through high school, but I still find something new every time I open it.  It's like some magic tome; a Book of Infinite Knowledge.

This got me to thinking.  Wouldn't it be neat to use the DMG as a magic item in a dungeon - a leather bound tome called the Dungeon Master's Guide, with an Efreet on the cover.  Whenever a character reads from the book he gains random information - sometimes useful, sometimes not.  Another possibility is to make it a bit more like a lore-based equivalent of the Book of Infinite Spells and allow a character to consult it to obtain the answer to an immediate problem or question.  Each of the 22 + d8 pages, once turned, can never be flipped back and when the last page is turned the book vanishes.

So while we might not be able to put the genie back in the bottle, maybe we can embrace player knowledge instead of fighting it, and use it in fun new ways.
Posted by Sean Robson at 8:30 PM

Both your in game MM and DMG are quite cool ideas. I like the idea of your gnome's work especially. It could make for some interesting campaign hooks as well.

I can't believe you got criticized for changing up the monsters.

It is very true; there is much disinformation in the Monster Manual and Fiend Folio with regard to the true nature of the beasts therein. Only advanced players and DMs ever discover this it seems..

Canon? To hell with that. I think this is inspired idea.

Very cool idea. One I have been playing with, but haven't though it out as much as you have. I love the picture of the mage totting the MM.

Thanks for the feedback guys! I'm looking forward to using the DMG as a magic item.

That is a really cool idea! I'd be inclined to make reading the in-game DMG have a chance of inducing confusion (as per spell).