The mid 1970's through the 1980's was the era of adult illustrated fantasy magazines.  The best known of these, Heavy Metal, which is still published, spawned numerous imitators, many of which were little more than badly written smut.  One of the worst in my collection was Warren Publishing's magazine, 1984, which came off has having been written by a socially maladjusted fourteen-year-old.

A late entry into the field, and one that was more mature and tasteful, and therefore an easier sell to my mother who would have raised an eyebrow at Heavy Metal, was Marvel Comic's Epic Illustrated.  I was a fan of Epic for several years in the '80's, but like most of my treasures of that time, are now lost to the forces of entropy.

I was fortunate enough, however, to have recently purchased a large collection of Epic Illustrated that someone had traded at my friend's comic shop, so I can relieve a bit of my youth, re-read some old favourites as well as issues I missed the first time around.  I can't resist sharing the spoils, so let's dial our time machine back thirty-one years to the spring of 1980 and flip through the premiere issue of Epic Illustrated. 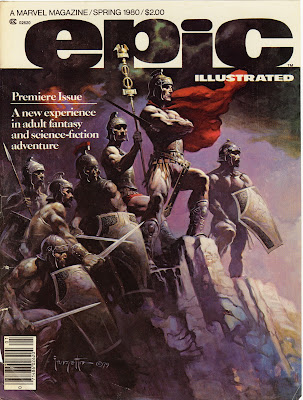 Now, I don't know about anyone else, but I'd even buy Chick Tracts comics if they had Frazetta covers, so it was a good move on Marvel's part to kick off their new magazine with kick-ass cover art by one of the most recognizable fantasy artists in the business.  The scene here suggests warriors on the brink of adventure, which hints at what lies within.
Unfortunately this issue's content's didn't quite live up to the promise of its cover.  The very first story within is a lame-ass Silver Surfer story.  Not only was it about a standard-fare Marvel superhero, but it was a cloyingly preachy story with a heavy-handed message that tried to be profound and clever but wasn't.  The Silver Surfer embarks upon a cosmic quest to find the ultimate answer of existence, sure that if he travels far enough and breaches the galactic boundary the answer will be laid out before him.  His journey ultimately brings him back to his starting point and he comes to the conclusion that the answer lies within each of us.  Yawn.
The only saving grace of this story, which was written by Stan Lee himself, was the beautiful art by John Buscema, whose work on Savage Sword of Conan I always loved. 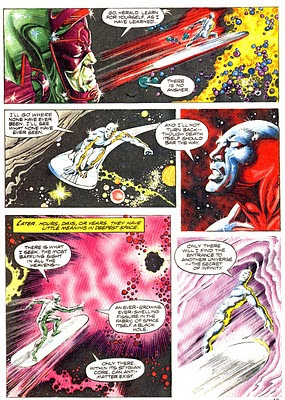 Most of the other stories in this issue are equally bad but with much worse art, and Epic might have sunk quickly into oblivion, never to be remembered, except that a good chunk of the magazine is devoted to the first three chapters of Jim Starlin's long-running series Metamorphosis Odyssey.
This is the story of Aknaton, last survivor of Orsiros, whose world was destroyed by the rapacious Zygotean Empire who have fought their way across the galaxy conquering everything in their path. Over the course of more than one-hundred thousand years, Aknaton lays the groundwork for his vengeance, creating life on uninhabited worlds, and uplifting the inhabitants of primitive worlds, such as the newly emerging hominids on the third planet of the Sol system. 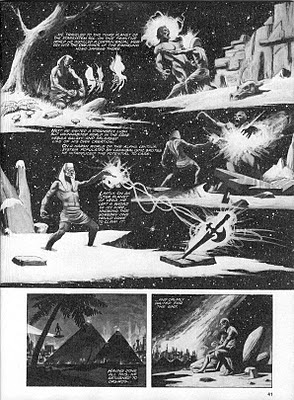 Metamorphosis Odyssey was strong enough in its own right to keep readers coming back while Epic struggled to find its place in the market and establish itself as something other than another Heavy Metal clone.    I'm thankful to Starlin for almost single-handedly keeping the magazine afloat, because Epic eventually does hit its stride and become something pretty special, but those early issues were very rough and rocky, indeed.
Posted by Sean Robson at 8:53 AM

That Aknaton dude is frikkin EPIC!!!

That Aknaton dude is E-P-I-C dude. He prolly the guy unleashed the power-cosmic junk on the primordial ocean and stuff

Ah, I remember that cover from several bookstore pilgrimages. At the time I was coming down off of Roman burnout from a multi-month school project, so I passed it by.

I think at one point I had every issue of EPIC or close to it. I loved that magazine and still mine idea from it to this vary day.

I am both pleased and saddened that most of my players never read it.

I know what you mean, Barking, it's nice when you can mine material and your players are none the wiser, but on the other hand you feel sorry for what they missed out on.

Ah, Epic Illustrated. Loved it! I agree, having a Silver Surfer story as the opening tale was a lame-ass move. Thinking about it now, I cannot come up with any rationale for this decision. But, it was no big deal to me back then. I soaked each issue up, just as I did Savage Sword of Conan and Conan the Barbarian comics.

Heavy Metal, Savage Tales, and Epic were my holy trinity as a lad in the 80s. Too bad that as they went along the 'suits' in marketing spurred them away from great storytelling and art to pseudoporn. I remember reading Strontium Dog and Cobalt 90, Blood & Gutz, and P Craig Russell's AMAZING Elric stories in the above. Last week I bought a mid 90s HM magazine - the quality just was not there.

Does anyone know what Heavy Metal is like these days? I've been tempted to pick up a subscription, but I'd hate to lay down the cash and find that it isn't the magazine I remember.